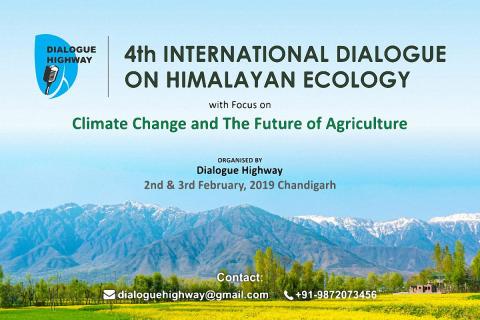 2019 Climate Change and Agriculture in the Himalayas

By Dialogue Highway, and his president Devinder Sharma

The Himalayas support about 20 percent of the world’s population. Bordering eight countries, the Himalayan mountain range is the tallest in the world. It covers an area of about 4.3 million square kilometres and nearly 1.5 billion people depend on it for water, food and energy. In India, the Himalayas  spans across 12 states – Jammu and Kashmir, Himachal Pradesh, Uttarakhand, Sikkim, Arunachal Pradesh, Nagaland, Manipur, Mizoram, Tripura, Meghalaya, Assam and (hill districts of) West Bengal.

But the ecologically fragile region, the storehouse of the third highest amount of frozen water on earth, is highly vulnerable to climate change. There are 34,919 glaciers in the Himalayan region having 75,779 sq kms of glaciated areas in Indus, Ganga and Brahmaputra river basins. Studies have shown that the low-altitude Himalayan glaciers are losing water at a faster pace than the ones in higher reaches due to rising temperatures creating water risk in these regions. The assessment is significant for India as a majority of its population is dependent on agriculture which requires water.
The Himalayan ecosystem is vital to the ecological security of the Indian landmass as it plays a crucial role in providing forest cover, feeding perennial rivers that are the source of drinking water, irrigation, and hydropower, conserving biodiversity, providing a rich base for high-value agriculture and spectacular landscapes for sustainable tourism. Himalayan agriculture is vulnerable to the impacts and consequences of various climatic and non-climatic factors as has been observed. These include changes on account of natural causes, climate change resulting from anthropogenic emissions and developmental pathways.
Any impact in the Himalayas would mean an effect on the life of millions of people not only of India but also of entire subcontinent. Climate Change indirectly disrupt livelihood security and can contribute to economic circumstances that necessitate migration. It has been widely observed that mountain farmers have already been estranged from their land, driving youth away from agriculture seeking other employment.
Already the Himalayan region is experiencing melting of glaciers, variability in monsoon rainfall, thereby leading to a higher frequency of extreme events. This is affecting the flow and flood regimes of the mountain streams along with the agriculture system, which is the primary source of livelihood for the hill communities.
The socio-economic impact of climate change in the Himalayas therefore is far reaching and extends beyond national borders. Since many preliminary studies reveal that the Himalayas will experience higher levels of climate change and obviously its associated impacts on biodiversity, agriculture and food security are going to be enormous.