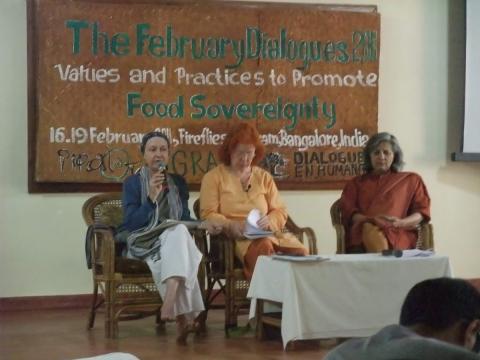 2011 The impact of climate change in rural areas

This conference will serve to integrate traditional knowledge with modern scientific practices to face the challenge of climate change in the area of food security and food sovereignty ([1]). Insights will also be drawn from cultural and religious traditions to motivate communities to act with a sense of urgency.

The impact of climate change in rural areas

Climate change in India will mean increase in surface temperature, changes in rainfall patterns, increase in the frequency of floods and droughts, the melting of the Himalayan glaciers and rise in sea-levels.  Changes in rainfall patterns and temperature will affect local water availability, disturbing the optimal cultivation period available for particular crops. According to some estimates, almost 40% of the agricultural production potential in some developing countries could be lost. Those most seriously affected will be farmers in dry-land regions where agriculture is rain-fed, and only one crop is grown per year.

Cereal production potential will decrease substantially in many developing countries. Rice production in India will decrease by almost a tonne/hectare if the temperature goes up 2oC. By 2050, about half of India's prime wheat production area could get heat-stressed, with the cultivation window becoming smaller, affecting productivity. For each 1oC rise in mean temperature, wheat yield losses in India are likely to be around 7 million tonnes per year, or around US $ 1.5 billion at current prices. Similar figures could apply to many countries in Africa and Asia. The emphasis on growing rice and wheat and the neglect of millets will have to be drastically corrected in the interests of food security and food sovereignty.

The current preoccupation in the international discourses on climate change is, however, on mitigation of Green House Gas (GHG) emissions. There is very little official discourse on how the affected communities need to adapt to face the consequences of climate change.

The need to integrate peoples’ traditional values, practices and religious insights in a holistic manner to meet the challenge of food security cannot be overstressed.

A huge challenge lies before farmers in the years ahead. To deal with the challenge of climate change farmers might find it useful to follow an ecosystem approach.

Agricultural biodiversity is central to an agro-ecosystem approach to food production. The more diverse the agro-ecosystem, the more efficient the network of insects and micro-organisms, that control pests and disease. Building resilience in agro ecosystems and farming communities, improving adaptive capacity and mitigating greenhouse gas emissions is the way to cope.

A knowledge-intensive rather than input-intensive approach should be adopted to develop adaptation strategies. A special package for adaptation should be developed for rainfed areas based on minimising risk. Some of the elements that need to be emphasised in this package are:

The conference will cover the following areas:

Participants will be drawn from South Asia, a few African countries, Asia, Europe and North America (if funds permit).   Most participants will represent farmers’ organisations and civil society organisations working in the rural context. There will also be people who are agricultural/climate change experts, policy makers, journalists and cultural and religious thinkers.

The results of this programme will be disseminated through a book, website, email bulletins, and through meetings of the GRAIN ([2]) network and other networks.

The participants to the February Dialogues will be treated to a spectacular all-night music festival which will start on 19th evening. About 3000 people are expected at this festival where the theme of food security and sovereignty will be promoted.

([1]) While food security implies the ability of a country to provide food for all its citizens food sovereignty emphasises the importance of peasants being able to feed themselves independent of the public distribution system or the market.

([2]) GRAIN stands for “Global Rural Adaptation Initiatives”. It is a network of farmers, rural community organisations, agricultural experts and media. The objective of this programme is to evolve and implement rural adaptation strategies in the context of climate change.

Home is an international training and cultural centre which come under the Pipal Tree trust. VISION. In a world that is globalising at a rapid pace Pipal Tree is acutely conscious of the ...